Mwende Gatabaki is both fearless and ambitious – with a bag of accolades to show for her years working in Kenya and abroad. If you have ever used the e-Citizen platform – either applied for a passport, good conduct, or even registered a business – then you have encountered the brain-work of Ms. Mwende

“I was working as Advisor to the President of the Africa Development Bank [AfDB] in Tunisia when President Uhuru Kenyatta asked me to come back to Kenya to champion his pet project – the digital transformation of Government which he termed as “the single of truth”.  This initiative birthed the e-Citizen platform and Huduma Centres where all government services are delivered from a single point.

“The project is a big success as it achieved its goal and has continued to grow as more government services are put on board.  Without hesitation, I can say the e-Citizen is perhaps Jubilee government’s best achievement over the last ten years.”

Interestingly, Ms Mwende’s priorities are very unique, unlike other governor aspirants. Top on her agenda is to unify the people of Kiambu.  “They have been divided deeply over the years by the mau-mau alignments, and party politics.  Secondly, Kiambu used to be the home of national leaders such as Jomo Kenyatta, Koinange, Gichuru, Njonjo, and Waira Kamau.  Later during Moi’s days, we had the likes of Magugu, Muite, and Njehu [my brother] who stood out.  But the story of leadership ended with that generation. We have been electing politicians without leadership credentials.  I would like to bring back the art of leadership, hence my slogan “Gûcokia Ûtongoria Kiambu”.

She was born in Githunguri sub-county and studied in a local primary school, Kahunira, then joined Limuru Girls in Limuru Sub-County for six-year, and proceeded to Kenyatta University for her first degree in Maths and Computer Science – a rare choice for women.  She then traveled to the UK to study Computer Science and IT at Salford University – wherein a class of 18 she was the only woman.  It’s from here that her confidence as being the only woman in a group, which she would require later in life, began to develop.

Mwende is a woman of many firsts.  She has worked as a senior executive in government, public and private sectors at national, continental, and global levels with accolades at every step along the way.

Her first job was with USAID as the Network Administrator, where she eliminated the use of typewriters and converted the myriad of US government forms to online forms.  She then joined UNICEF as Regional ICT Manager, in charge of the Regional office, Kenya, Somalia, and Sudan country offices.

After a very successful implementation of the first telecommunication network between the UNICEF Nairobi office and Somali [Hergeisa], she was poached by UN World Food Program in Rome, Italy to lead the Field ICT support services. As part of her role, she developed and delivered IT training to IT staff in WFP offices during which she was often asked “which part of the USA do you come from.” Most people especially from Europe and the US found it difficult to believe that they could be trained in technology by someone from a ‘third world country and more so a woman.

After 8-years in Italy, she came back to Kenya and joined KTDA as the first General Manager for the ICT department. Being the only woman in the senior executive team of 9, and the board of 12 men she says:  ‘I got used to being the only woman on decision-making tables.”  That did not stop her from leading the transformation of the smallholder tea farming value chain making KTDA the first agribusiness [globally] to be recognized for a global technology award in the USA.  This annual award recognizes the top 100 companies globally, that excel in using digital transformation to achieve significant social and economic impact.  Consequently, Mwende was recognized as the top public sector Chief Information Officer [CIO] in South Africa by Africa ICT achievers.

Being one to move on after an achievement, Ms Mwende joined the African Development Bank [AfDB] as a Senior Advisor at the Presidency. By leveraging technology, she championed the decentralization of the Bank to 45 country offices including the setting up of the AfDB Kenya Regional Office. This project had stalled for over five years before she took it up. It was later in 2013, that she came to Kenya to receive  “ Woman of the Year” and “Best ICT utilization” awards at the [email protected] Years Ceremony.

It was while at the Bank, that she was called upon by President Uhuru Kenyatta to come back home and champion the digital transformation of Government.  The project was triggered by the West Gate attack, which raised attention to the porousness of Kenya’s borders.  In the delivery of this project, the e-Citizen platform and a network of Huduma Centres were established.

However, Ms Mwende was not fully satisfied with the achievement: “One of the things I really wanted, was to establish a clean voters register to replace the red, green, and black registers at IEBC then.  The idea was that at the age of 18 years, a Kenyan citizen would automatically get their ID and their name added to the voters’ register – this would have made the 2017 elections difficult to rig.

However, the powers that be, were not amused. The name of the project was quickly changed from the “President’s project” to “Mwende’s Project. Consequently, my career in Nyayo house, as Director-General of the state agency in charge of the project, ended abruptly on that note.”

Ms Mwende was immediately appointed by McKinsey & Co (a top global management consulting firm) as Senior Advisor for Public Sector in East Africa – the first Kenyan to be hired by McKinsey at the Partner level.

“The sky is no longer the limit – there is water in Mars!” she laughs.

“As earlier stated, Kiambu is in need of a leader, not a politician! That is where I come in!” She says.

Ms Mwende’s depth and expertise in providing leadership are second to none.  She has acquired a wealth of expertise in large public projects management, resource mobilization, and established networks with government and international development agencies as a credible partner. In particular, her experience at KTDA and AfDB {a multi-lateral financial institution} – equipped her with a broad range of skills including resource mobilization, public project management, and public financial management – skills that are highly needed in Kiambu county.

Key things that she is highly concerned about include the fact that only 40% of the projects in the County Integrated Development Plan [CIDP] get implemented due to various challenges including lack of resources and project management skills.  In addition, pending bills are now to the tune of KES 300m.  Hence, there are many incomplete projects and many unhappy contractors.

“Shockingly, Kiambu county only collects 18% of the estimated internally generated revenue -an area that requires immediate revenue generation reforms. Over and above that Kiambu is among the counties with the highest youth [between 18-29 years] unemployment in the country at 60%”

“My value proposition to Kiambu County is my ability to hit the ground running by hiring a high-performance executive team, establishing corporate governance, and putting systems in place within my first 100 days. This will be followed, by my first project: digital transformation of Kiambu County operations to provide transparency and accountability to stakeholders on the management of county resources. In five years, I want to transform Kiambu into the first world-class county in Kenya.“

Earlier this month of March, Ms Mwende underwent a coronation ceremony, carried out by a senior Kikuyu elder and leaders of the Agachiku Clan, to which she belongs to.  `Mwende wa Gatabaki is now, perhaps the highest-ranked “Agikuyu Woman Leader” since “Wangu wa Makeri”, having slaughtered a bull and four goats for the community.  This traditional leadership rite of passage empowers her to pursue her quest to become the first woman governor of Kiambu County.

“In my mother tongue, we say, “if you join the monkey dance, be ready to be hit by the long tails – we need to develop thick skins. I would really want to see more women take this bold step that I have taken so that we can participate in the politics”. In this day and age, three governors out of 47 is totally unacceptable.  I believe that with more women in top county levels, better and more inclusive decisions will be made.

Mwende is a mother and wife to the renowned Economist Dr. David Ndii. 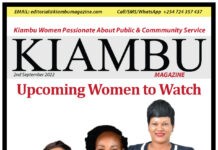 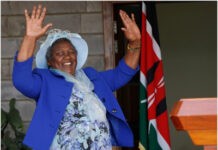 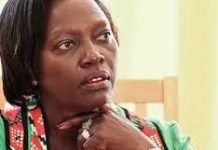 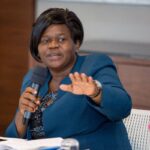